In its quest to deliver high-speed Internet service to rural areas around the globe, Facebook has successfully transmitted data at a speed of 20Gbps between two test towers in Southern California. The milestone-setting tests were conducted earlier this year in the so-called E-band frequencies, a group of millimeter wave frequencies between 60 and 90GHz. Such signals are capable of high-bandwidth data transmission but are susceptible to attenuation from distance, weather, and
9 views0 comments
Christopher Todd

The 2016 Commercial UAV Expo has just concluded in at the MGM Conference Center in Las Vegas, Nevada. Established and emerging unmanned aerial vehicle companies from around the globe descended for three days of product showcases and seminars highlighting the many grown opportunities in this rapidly emerging industry. Highlighting the conference was the proliferation of direct geo-referencing workflows emerging by building UAV platforms that incorporate both payload sensors an
5 views0 comments 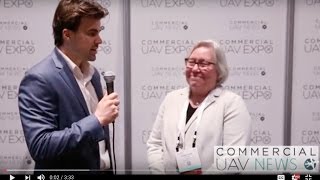 VIDEO: The Impact of Drones on Data Management via Commercial UAV Expo