Drone shows are a great way to learn about the industry.
963 views0 comments
Maholi Hernandez 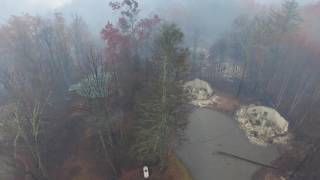 A group of researchers at University of Toronto are developing a drone that can carry a life-saving automatic external defibrillators (AEDs) directly to homes. Justin Boutilier, a PhD candidate in the Faculty of Applied Science & Engineering, envisions that when a family member witnesses a cardiac arrest, he will call 911, and within minutes, an AED is flown to their doorstep or balcony. The candidate is working with AssociateBoutilier Associate Professor Timothy Chan, direct
10 views0 comments
Christopher Todd

In 2018, DARPA will be releasing a working prototype of its Tern (Tactically Exploited Reconnaissance Node) drone system that could eventually provide persistent surveillance virtually anywhere in the world. The Tern program would allow fully-autonomous drones to take off and land vertically from small-deck ships to the world. Once in flight, it will become the eyes and ears for ships for long periods of time. Navy and Marines want to improve persistent surveillance capabilit
15 views0 comments
Maholi Hernandez

A mock exercise took place in Fallon, Nevada, where The Fallon Police Department responded to a report of a man walking near the railroad between North Maine and Taylor streets. Yearly, The Federal Railroad Administration reports a number of trespasser on the rails. According to Rich Gent of Hot Rail Security, Nevada has an average of two rail suicides per year. “One thing people don’t think about is the horrible trauma that the train crews and first responders have to deal w
37 views0 comments
Maholi Hernandez

Aerovel's Flexrotor created a drone designated to fly over water, without the fear of losing it at open seas. Without the assistance of any infrastructure, the unmanned aerial system can operate from almost any vessel, since it can land and take off just like an helicopter. "What they were intended for was to go out and spot tuna or anything that you needed to find in an austere environment where manned aircraft are no longer safe," says Matt Parker, vice president of Precisi
29 views0 comments
Christopher Todd

On Nov.15, 2015, Colombia's authorities confiscated an unmanned vehicle system for carrying small shipments of cocaine to Panama. Near the town of Bahía Solano on Colombia’s northwest coast, the police found 130 kilos (286 pounds) of cocaine, and small pieces of UAS buried in the ground. The regional police commander stated that the aircraft was owned by the world's largest cocaine producer, Clan del Golfo, or “Gulf Clan." The group is formed by 1,000 to 5,000 men, and, as a
20 views0 comments
Maholi Hernandez

AeroVironment Inc. provides different unmanned aircraft systems to sought innovative solutions for safety, infrastructure and energy. Their new Quantix drones will support farms and the agriculture to improve production and efficiency. The technology is the combination of drones and cloud-based analysis of any field that needs to be examined. “In many cases, farmers rely on themselves or their people to walk the fields, and if they’re managing large fields in excess of 100 ac
11 views0 comments
Christopher Todd

Crisis Mode: The Disaster that is the GoPro Karma Drone

The GoPro Karma disaster shows why the US ought to focus on software for the near term.
62 views0 comments
Christopher Todd

A ViDAR payload package on a UAV can be a useful tool for naval force protection.
26 views0 comments
Christopher Todd

SUMMARY: Unmanned aircraft vehicles can serve as a useful tool to monitor crowds at sporting events. Advanced payloads and sensors can provide an array of useful data back to law enforcement commanders on the ground. PROBLEM: Sporting events between rival teams can lead to escalating tensions between opposing factions of fans. This is especially true it the UK, when football matches can cause soccer "hooligans" to descend upon the event seeking to cause trouble. SOLUTION: Wes
111 views0 comments
Christopher Todd

With the commercial unmanned aircraft vehicles (UAV) industry evolving, the issue of insurance has been thrust into the forefront as a key component for certified remote pilots who seek to build a reputable business model. One company has emerged to provide an on-demand insurance options to solve this part of the equation. Verifly offers $1,000,000 of smartphone app-based, on-demand drone liability insurance for a 1/4 operating radius around a fixed GPS point. The cost is ty
16 views0 comments
Christopher Todd

COLORADO SPRINGS, Colorado - The Federal Aviation Administration (FAA) is investigating a close call between a drone and a passenger jet that took place on October 26, 2016 just south of the Colorado Springs airport, according to a report from KRDO News Channel 13 ABC. The pilot of an MD-80 jet reported an unidentified unmanned aircraft vehicle (UAV) flying at approximately 8,000 feet about 3/4 of a mile south of the airport runway. Air traffic control alerted the local sher
9 views0 comments
1
23