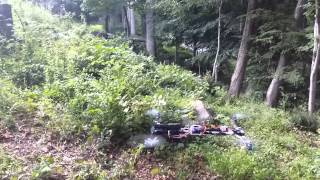 In 1980s, Afghan rebels fought Soviet Forces, and one of the many consequences of battles was the never found land mines. Two brothers, Mahmud and Massaud Hassani saw firsthand the damage land mines did to anyone unlucky enough to stumble across them. So, they decided to create a prototype drone that will detect and destroy the explosive devices. Their invention was featured Wednesday in the NT100, a list by Britain-based charity Nominet Trust of innovations that use technolo
3 views0 comments
Christopher Todd

The US military's research agency has announce weapons systems that could defend land vehicles or ships from attacks by drones. The Islamic State (IS) have created off-the-shelf drone to attack U-backed Iraqi troops pushing towards Mosul. Even though there are no reports of a drone attack, the US Defense Advanced Research Project Agency (DARPA) wants to be ahead of the game. The drone defense system needs to serve the military and civilians in their homeland or abroad. The pr
33 views0 comments
Christopher Todd

In 2018, DARPA will be releasing a working prototype of its Tern (Tactically Exploited Reconnaissance Node) drone system that could eventually provide persistent surveillance virtually anywhere in the world. The Tern program would allow fully-autonomous drones to take off and land vertically from small-deck ships to the world. Once in flight, it will become the eyes and ears for ships for long periods of time. Navy and Marines want to improve persistent surveillance capabilit
15 views0 comments
Christopher Todd

Remember those images of the D-Day landings in France? Now image those same scenes with swarms of drones engulfing the enemy positions gathering intelligence, blocking communications, and delivering deadly munitions. That is the vision behind LOCUST (Low-Cost UAV Swarming Technology) which has been developed by the Office of Naval Research to bring a flotilla of weapons including underwater drones and mine countermeasures, unmanned surface vessels, and unmanned aircraft syst
12 views0 comments