Traffic and Accident Scene Forensic Analysis with Drones and UAS

Is it really possible? Could drones replace police helicopters one day? According to one Arizona police chief, the answer is "yes." Tucson Police Chief, Chris Magnus, confirmed that his department is considering purchasing drones to replace their two helicopters. Magnus says maintaining both aerial vehicles is expensive, and they are approaching the end of their useful life. "Yes, we are looking at drones," Magnus confirmed last week, saying keeping both helicopters flyin
42 views0 comments
Maholi Hernández

Valparaiso Indiana Police have begun using UAS to assist during investigations, search missing people and capturing crime scenes, police said. The department included two drones in their program, which are equipped with cameras, thermal imaging, and holds two certifications for use by the FAA. IT Officer Phil Rochon said the more advanced level of certification allows for some use at night. According to Valparaiso spokesman, Sgt. Mike Grennes, drones are specially useful duri
20 views0 comments
Maholi Hernandez

How Police Are Embracing Unmanned Aircraft Systems Around the World

DroneLife.com's Jason Reagan recently highlighted "3 Ways Police Are Using Drones Around the World" and we we wanted to take you on a brief trip around the world of police drones. 1. ENGLAND As Airborne Response reported previously, West Midlands Police have initiated a pilot program to monitor the "hooligan" crowds attending football (soccer) matches in an attempt to mitigate game-day violence. 2, AUSTRAILIA Minister of Parliament Scott Stewart of Townsville is requesting th
18 views0 comments
Christopher Todd 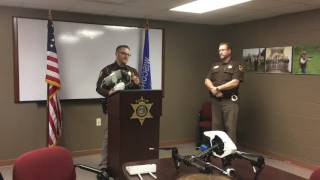 SUMMARY: Unmanned aircraft vehicles can serve as a useful tool to monitor crowds at sporting events. Advanced payloads and sensors can provide an array of useful data back to law enforcement commanders on the ground. PROBLEM: Sporting events between rival teams can lead to escalating tensions between opposing factions of fans. This is especially true it the UK, when football matches can cause soccer "hooligans" to descend upon the event seeking to cause trouble. SOLUTION: Wes
111 views0 comments
Christopher Todd

The Palm Beach County Sheriff's Office (PBSO) [Florida] has received approval from county commissioners to embark on a unmanned aircraft systems (UAS) pilot program under a $1 million grant from the Florida Department of Law Enforcement (FDLE), according to The Palm Beach Post. The UAS pilot program will be used primarily for marine scenarios involving search and rescue missions, smuggling mitigation, and situational awareness for high-risk events, according to the Sheriff's
70 views0 comments 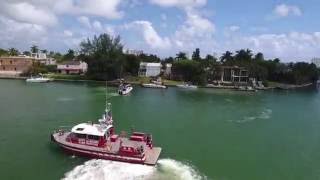 SUMMARY: Unmanned aircraft systems can help law enforcement and first responders reduce the amount of time it takes to investigate an traffic accident by about 85% leading to economic benefits in the hundreds of thousands of dollars. PROBLEM: In 2010 there were over 2010 traffic fatalities across Canada's highways and roads. The number of major collisions was even higher. Each crash places an intense burden on first responders. Fire Rescue must suppress any hazards and extr
8 views0 comments
Christopher Todd

SUMMARY: Drones represent a valuable tool for police Special Weapons and Tactics (SWAT) teams to use when responding to dangerous situations with armed suspects. It is essential for SWAT teams to train with UAV's to develop tactical proficiency between the drone pilot and the rest of the team. PROBLEM: A 48 year-old Wisconsin man dialed 911 and told the dispatcher that he was armed with a 9mm handgun and ammunition and wanted to harm himself. After the call, the man fled
54 views0 comments
Christopher Todd

Historically, police air units have been the domain of large law enforcement organizations with massive budgets that enable support of such an expensive mission. Now, for the first time in history, small unmanned aircraft systems (sUAS) allow police departments of all sizes to utilize the many benefits traditionally derived by those departments having their own aviation units. From event monitoring, to tactical situation, to crime scene analysis, sUAS' provide a cost effecti
54 views0 comments
Christopher Todd

Flying somewhat under the radar, the the Federal Law Enforcement Training Center – part of the Department of Homeland Security – posted this solicitation late last week seeking a contractor willing to provide five small drones and an accompanying training center to teach law enforcement officers how to operate sUAS. Speculation is abundant as various pundits are attempting to read the tea leaves to ascertain precisely what the request means. However one thing is clear; DHS r
99 views0 comments