A mock exercise took place in Fallon, Nevada, where The Fallon Police Department responded to a report of a man walking near the railroad between North Maine and Taylor streets. Yearly, The Federal Railroad Administration reports a number of trespasser on the rails. According to Rich Gent of Hot Rail Security, Nevada has an average of two rail suicides per year. “One thing people don’t think about is the horrible trauma that the train crews and first responders have to deal w
37 views0 comments
Christopher Todd 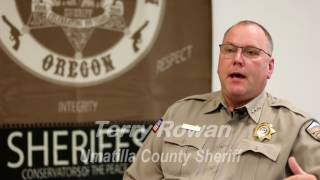 VIDEO: Click above to watch the YouTube video from the Umatilla County Sheriff's Dept. SUMMARY: Unmanned aerial systems can serve as a valuable force multiplier toward initiating a search and rescue operation while ground teams are still in the staging phase. Crucial information can also be ascertained via the drone to help the ground teams conduct their search more effectively. PROBLEM: When conducting a search of a substantial rural area, the Umatiila County, Oregon Sherif
30 views0 comments